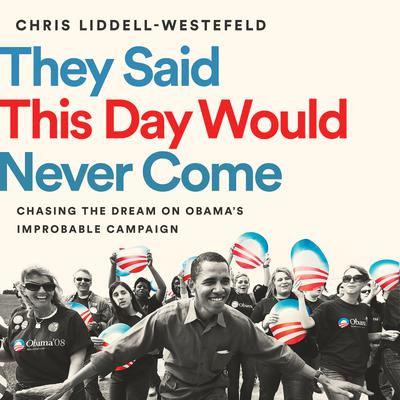 They Said This Day Would Never Come

The thrilling, unlikely story of Barack Obama's first presidential campaign, as told by the volunteers and staff who propelled the longshot candidate to the presidency

In the year leading up to the Iowa caucuses, few thought a freshman senator named Barack Hussein Obama would be able to win the Democratic nomination--not to mention become the most popular leader in the world.

But something was stirring. Hundreds of young people from all over the country began assembling first in Iowa. These "kids" became the foundation of one of the most improbable presidential campaigns of the modern era.

Chris Liddell-Westefeld was one of those kids. He and thousands of other staff and volunteers dedicated every minute of their time, intelligence, and resources to help elect Barack Obama, as what started in the midwest spread nationwide. Drawn from more than 200 interviews with alumni including David Axelrod, David Plouffe, Alyssa Mastromonaco, Dan Pfeiffer, Valerie Jarrett, Josh Earnest, Tommy Vietor, Jon Favreau, and President Obama himself, They Said This Day Would Never Come takes readers deep inside the most inspirational presidential campaign in recent history.