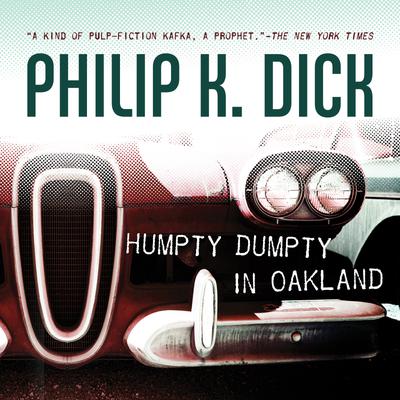 Humpty Dumpty in Oakland is a tragedy, a dark comedy, and vintage Philip K. Dick.

Al Miller is a self-proclaimed nobody, a used-car salesman with a lot full of junkers. His elderly landlord, Jim Fergessen, has decided to retire and has just cashed in on his property, which includes the lot that Al rents next to Fergessen’s garage.

Chris Harman is a record-company owner who has relied on Fergessen’s for years to fix his Cadillac. When he hears about Jim Fergessen’s sudden retirement fund, he tells him about a new realty development that Harman swears is a surefire path to easy wealth. Fergessen sees his chance to finally be a real businessman, well-to-do and respected like Harman.

Al is convinced that Harman is a crook out to fleece Fergessen. Even if he doesn’t particularly like Fergessen, Al is not going to stand by and watch him get cheated. Only Al’s not very good at this, either. Maybe he’s not even right.

"It would be a shame to miss this….We all know that easy money rarely is, but it's a lesson worth reading about again." —The Kansas City Star

"This paranoid and ambiguity-filled exploration into the psyche of the small businessman showcases not only Dick's wild imagination and sardonic wit but also, and most notably, his mastery at intertwining perception with reality." —Publishers Weekly