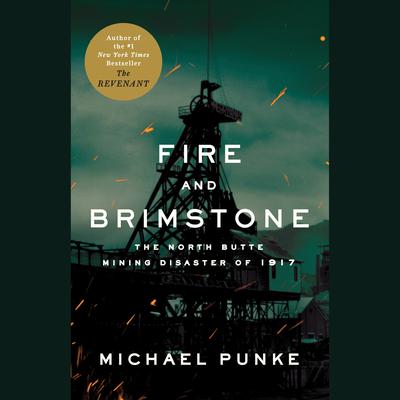 The North Butte Mining Disaster of 1917

The author of the #1 New York Times bestseller, The Revenant--basis for the award-winning motion picture starring Leonardo DiCaprio--tells the remarkable story of the worst hard-rock mining disaster in American history.

The worst hard-rock mining disaster in American history began a half hour before midnight on June 8, 1917, when fire broke out in the North Butte Mining Company's Granite Mountain shaft. Sparked more than two thousand feet below ground, the fire spewed flames, smoke, and poisonous gas through a labyrinth of underground tunnels. Within an hour, more than four hundred men would be locked in a battle to survive. Within three days, one hundred and sixty-four of them would be dead.

Fire and Brimstone recounts the remarkable stories of both the men below ground and their families above, focusing on two groups of miners who made the incredible decision to entomb themselves to escape the gas. While the disaster is compelling in its own right, Fire and Brimstone also tells a far broader story striking in its contemporary relevance. Butte, Montana, on the eve of the North Butte disaster, was a volatile jumble of antiwar protest, an abusive corporate master, seething labor unrest, divisive ethnic tension, and radicalism both left and right. It was a powder keg lacking only a spark, and the mine fire would ignite strikes, murder, ethnic and political witch hunts, occupation by federal troops, and ultimately a battle over presidential power.