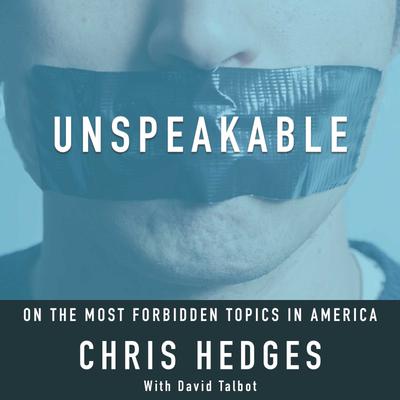 Unspeakable: Chris Hedges on the most Forbidden Topics in America

Chris Hedges on the most taboo topics in America, with David Talbot.

Chris Hedges has been telling truth to (and against) power since his earliest days as a radical journalist. He is an intellectual bomb thrower, who continues to confront American empire in the most incisive, challenging ways. The kinds of insights he provides into the deeply troubled state of our democracy cannot be found anywhere else. Like many of our most important thinkers, he has been relegated to the margins because of ideas deemed too radical—or true—for public consumption. Whether it is covering the dissolution of former Soviet states or embedding in the Middle East to understand the post-9/11 world, he has been a singular voice pushing against mainstream media disinformation and the amnesia of establishment received wisdom. He is an intellectual heir to American radical heroes such as Thomas Paine and Noam Chomsky, and is dedicated to reigniting a shared commitment to radical equality and honesty.

Hedges here speaks up about the most pressing issues that currently face our nation. He tackles the rise of a fascist right in support of Donald Trump, which advocates xenophobia and violence in a push for American totalitarianism. He rails against the posturing of inclusivity from establishment elites on both sides of the aisle, who post-Occupy-Wall-Street continue to advocate for policies that make America uninhabitable for all but the ultra-rich and, as lackeys for corporate interests, continue to expand income inequality in all directions. He tears into the contemporary glamorization of the military and the unchecked, unchallenged hawkishness that defines contemporary American foreign policy. Moreover, he shows his support for contemporary revolts against this twisted order—such as Black Lives Matter—that represent Americans refusing to take the destruction of their country lying down. And that’s just the start.

He possesses a clear understanding of the challenges that lie before us, and has proven to be ahead of the curve time and again. All of which is to say, Chris Hedges is unafraid to say what is necessary and true—and has always been. If we are to combat the intellectual and moral decay that have come to grip American life, we must listen to him and the urgent message he brings in this book.