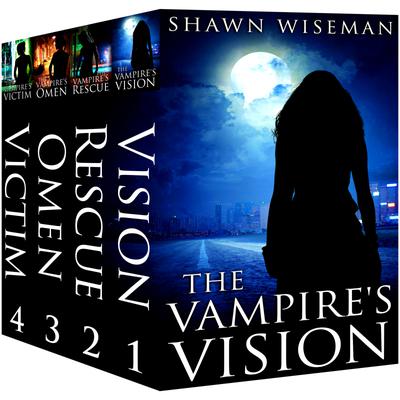 The first four books in a series where you'll be "left with wanting more."

A new war is brewing between psychics and vampires. Both factions hide in the shadows in a tenuous truce since the last battle between the bloodsuckers and the mind readers, but someone is pushing both sides closer to conflict.

Kara, a vampire and a psychic, finds herself literally caught in the middle of the burgeoning battle, and struggles to resolve the clash before it happens. Neither side wants her, and with enemies at every turn Kara doesn't know who she can trust.

Meanwhile, Kara's best friend, Olivia, a vampire, finds herself the target of several attacks from psychics. If Kara can't find out who the mastermind behind everything is in time, a war will be the least of her worries.

"A vampire book that is completely different from what I've read before."

It should have been a normal job, but when psychic police show up and kidnap her best friend, Olivia, Kara the female vampire must become a vigilante and take justice into her own hands.

Kara's on her own though, as her kind shuns her for being born with psychic powers. The wars might have ended, but there's bad blood between the blood suckers and the mind readers of the world.

To get help and save Olivia, Kara makes a deal with the devil, or the closest equivalent: Vasha, a gangster with ties to vampires and psychics.

As Kara works to free her friend, she discovers a storm brewing between the supernatural factions, and hears rumblings of a new war on the horizon. Will Kara save Olivia before she becomes the spark that starts a new conflict, or is it already too late?

With a female protagonist and strong female heroines, this action packed vampire series for adults is sure to please.