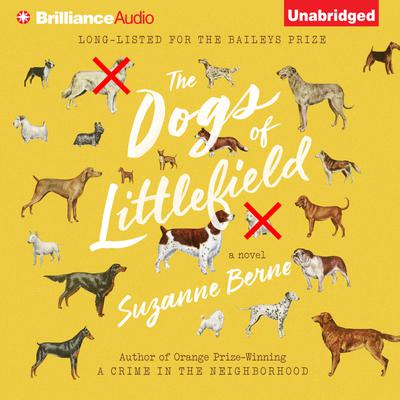 The Dogs of Littlefield

From the Orange Prize–winning author of A Crime in the Neighborhood, Suzanne Berne’s The Dogs of Littlefield is “sublime” (The Chicago Tribune), a suspenseful and hilarious “suburban comedy of manners par excellence” (Kirkus Reviews) that explores the unease behind the manicured lawns of suburban America.

Littlefield, Massachusetts, named one of the Twenty Best Places to Live in America, is full of psychologists and college professors, proud of its fine schools, its girls’ soccer teams, its leafy streets, and quaint village center.

Yet when sociologist Dr. Clarice Watkins arrived in Littlefield to study the elements of “good quality of life” someone begins poisoning the town’s dogs. Are the poisonings in protest to an off-leash proposal for Baldwin Park—the subject of much town debate—or the sign of a far deeper disorder?

“Nothing sucks a reader in like psychological menace, and Suzanne Berne is a master of the craft…. Her scenes are elegantly composed, and even throwaway characters jump off the page” (The New York Times). A wry exploration of the discontent concealed behind the manicured lawns and picket fences of darkest suburbia, The Dogs of Littlefield explodes with “comic exuberance and restrained beauty” (The Boston Globe).