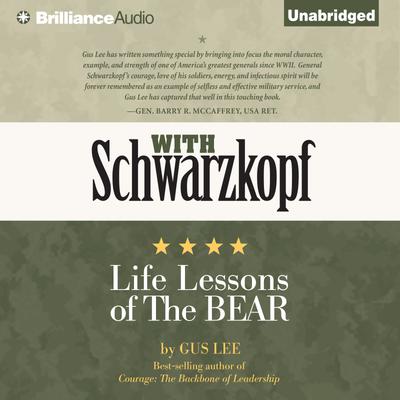 Life Lessons of The Bear

With Schwarzkopf is Gus Lee's remembrance of his mentor and friend H. Norman Schwarzkopf, and his firsthand account of how Schwarzkopf shaped his life. In 1966, Lee, a junior-year cadet at West Point, was bright, athletic, and popular. He was also on the verge of getting kicked out. Nearing the bottom of his class due to his penchant for playing poker and reading recreationally instead of studying engineering, he was assigned a new professor: then-Major Norman Schwarzkopf. Schwarzkopf's deeply principled nature and fierce personality took hold of the wayward cadet, and the two began meeting regularly and discussing what it meant to be a scholar, a soldier, and a man.

Lee's vibrant, witty narrative brings his more than forty-year relationship with Schwarzkopf to life. Listeners get an inside look at West Point culture; they see Schwarzkopf's bristling anger with his rebellious pupil as well as his tenacity, intellect, and moments of surprising emotional warmth; and they watch as Lee starts to absorb his teachings. As he left West Point and took on more professional and personal roles, Lee approached every crisis or difficult decision by channeling his mentor. Over the years, Schwarzkopf's instilled values, wise counsel, and warm conversations shaped Lee and brought the two together in an unlikely friendship. In With Schwarzkopf, Lee passes along the lessons he learned so future generations can hear Schwarzkopf's important teachings.