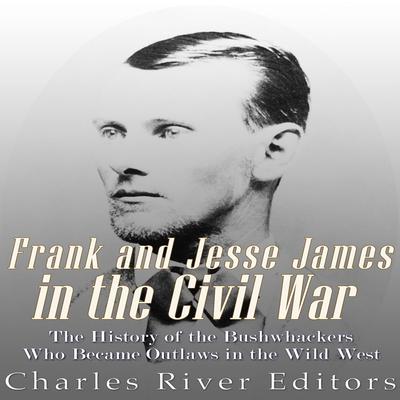 Frank and Jesse James in the Civil War

The Civil War is best remembered for the big battles and the legendary generals who fought on both sides, like Robert E. Lee facing off against Ulysses S. Grant in 1864. In kind, the Eastern theater has always drawn more interest and attention than the West. However, while massive armies marched around the country fighting each other, there were other small guerrilla groups that engaged in irregular warfare on the margins.

Among these partisan bushwhackers, none are as infamous as William Quantrill and Quantrill’s Raiders. Quantrill’s Raiders operated along the border between Missouri and Kansas, which had been the scene of partisan fighting over a decade earlier during the debate over whether Kansas and Nebraska would enter the Union as free states or slave states. In “Bleeding Kansas”, zealous pro-slavery and anti-slavery forces fought each other, most notably John Brown, and the region became a breeding ground for Unionists and pro-slavery factions who shifted right back into similar fighting once the Civil War started. Rather than target military infrastructure or enemy soldiers, the bushwhackers rode in smaller numbers and targeted civilians on the other side of the conflict, making legends out of men like Bloody Bill Anderson and John Mosby.

Though Quantrill’s Raiders were named after their famous leader William Clark Quantrill, the most notorious of the Raiders was none other than Jesse James. Frank and Jesse James have become American legends for their daring robberies and narrow escapes from the law, and many people, especially in the South, see them as folk heroes, unreconstructed rebels fighting for the Lost Cause against rich Northern bankers and capitalists. While that last bit is a matter for debate, the James brothers did indeed consider themselves Southern rebels at heart.

The Wild West has made legends out of many men after their deaths, but like Wild Bill Hickok, Jesse James was a celebrity during his life. However, while Hickok was (mostly) a lawman, Jesse James was and remains the most famous outlaw of the Wild West, with both his life of crime and his death remaining pop culture fixtures. James and his notorious older brother Frank were Confederate bushwhackers in the lawless region of Missouri during the Civil War. Despite being a teenager, Jesse James was severely wounded twice during the war, including being shot in the chest, but that would hardly slow him down after the war ended.

Eventually, Quantrill’s Raiders headed south, and they eventually split off into several groups. Quantrill himself was killed while fighting in June 1865, nearly two months after Lee surrendered to Grant at Appomattox, but his name was kept alive by the notorious deeds of his Raiders during the war and the criminal exploits of former Raiders like Jesse and Frank James, as well as the Younger brothers. These men became some of America’s most famous outlaws, and they used guerrilla tactics to rob banks and trains while eluding capture.

While their robberies were conducted more to enrich themselves than to strike back against the North, their rebel credentials were impeccable. The brothers came from a secessionist, slaveholding family and both fought for the Confederacy in the bitterest guerrilla war the nation has ever seen. To understand their outlaw careers, and their enduring legacy, one must understand how Frank and Jesse James fought during the Civil War.

Frank and Jesse James in the Civil War: The History of the Bushwhackers Who Became Outlaws of the Wild West chronicles the history and events that involved the James brothers during the Civil War, and how the Civil War affected their lives as outlaws.