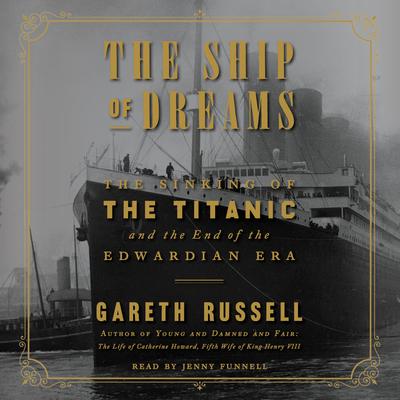 “The Ship of Dreams recounts the Titanic epic largely from the perspective of six of her first-class passengers, including the naval architect who designed the ship; a movie star; a vice president of the Pennsylvania Railroad and his 17-year-old son, Isidor Strauss, who founded Macy’s Department Store; and Lucy Noël Martha Leslie, the Countess of Rothes. This incisive and engrossing account of the ship’s evolution and tragic loss injects an intelligent light into an event that is as much enshrouded in legend as the Titanic’s remains are in the deep, dark ocean. This story is both a paean to the genius of the age that gave birth to the Titanic and a eulogy for the hubris that doomed her.”

This original and “meticulously researched retelling of history’s most infamous voyage” (Denise Kiernan, New York Times bestselling author) uses the sinking of the Titanic as a prism through which to examine the end of the Edwardian era and the seismic shift modernity brought to the Western world. “While there are many Titanic books, this is one readers will consider a favorite” (Voyage).

In April 1912, six notable people were among those privileged to experience the height of luxury—first class passage on “the ship of dreams,” the RMS Titanic: Lucy Leslie, Countess of Rothes; son of the British Empire Tommy Andrews; American captain of industry John Thayer and his son Jack; Jewish-American immigrant Ida Straus; and American model and movie star Dorothy Gibson. Within a week of setting sail, they were all caught up in the horrifying disaster of the Titanic’s sinking, one of the biggest news stories of the century. Today, we can see their stories and the Titanic’s voyage as the beginning of the end of the established hierarchy of the Edwardian era.

Writing in his signature elegant prose and using previously unpublished sources, deck plans, journal entries, and surviving artifacts, Gareth Russell peers through the portholes of these first-class travelers to immerse us in a time of unprecedented change in British and American history. Through their intertwining lives, he examines social, technological, political, and economic forces such as the nuances of the British class system, the explosion of competition in the shipping trade, the birth of the movie industry, the Irish Home Rule Crisis, and the Jewish-American immigrant experience while also recounting their intimate stories of bravery, tragedy, and selflessness.

This is “a beautiful requiem” (The Wall Street Journal) in which “readers get the story of this particular floating Tower of Babel in riveting detail, and with all the wider context they could want” (Christian Science Monitor).