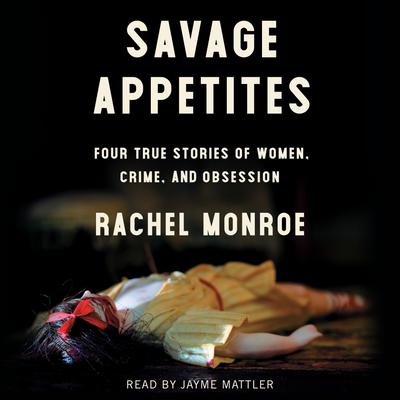 “Savage Appetites: Four True Stories of Women, Crime and Obsession explores obsession, crime and violence and why we as a culture, specifically women, are fascinated by it. Monroe goes beyond the gruesome details of violent crime using not only her experience as a reporter, but also personal narrative and social examination. She shines a light on some of the most gruesome murders and the rippling consequences that occur long after justice, or what we think is justice, is done. If you liked I'll Be Gone In the Dark, you will love this one. I could not stop listening!”

A “necessary and brilliant” (NPR) exploration of our cultural fascination with true crime told through four “enthralling” (The New York Times Book Review) narratives of obsession.

In Savage Appetites, Rachel Monroe links four criminal roles—Detective, Victim, Defender, and Killer—to four true stories about women driven by obsession. From a frustrated and brilliant heiress crafting crime-scene dollhouses to a young woman who became part of a Manson victim’s family, from a landscape architect in love with a convicted murderer to a Columbine fangirl who planned her own mass shooting, these women are alternately mesmerizing, horrifying, and sympathetic. A revealing study of women’s complicated relationship with true crime and the fear and desire it can inspire, together these stories provide a window into why many women are drawn to crime narratives—even as they also recoil from them.

Monroe uses these four cases to trace the history of American crime through the growth of forensic science, the evolving role of victims, the Satanic Panic, the rise of online detectives, and the long shadow of the Columbine shooting. Combining personal narrative, reportage, and a sociological examination of violence and media in the 20th and 21st centuries, Savage Appetites is a “corrective to the genre it interrogates” (The New Statesman), scrupulously exploring empathy, justice, and the persistent appeal of crime.