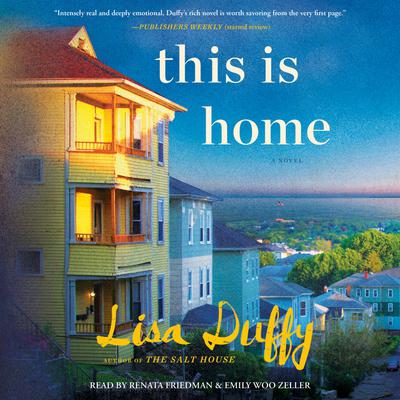 “I enjoyed Lisa Duffy's first book, The Salt House. She has not lost her touch with her new release, This Is Home. This Is Home centers around sixteen-year-old Libby, who lives in a three-story house with her father, two crazy, well-meaning aunts and a new tenant, Quinn. The reader gradually learns of all their back stories and how they eventually intertwine. Duffy has a gift for creating well-rounded, relatable characters. This Is Home encompasses family love, heartbreak, loyalty, and most of all, home. I highly recommend this heartwarming book. The narration of This Is Home is top-notch.”

From the author of book club favorite The Salt House comes a deeply affecting novel about a teenage girl finding her voice and the military wife who moves in downstairs, united in their search for the true meaning of home.

Sixteen-year-old Libby Winters lives in Paradise, a seaside town north of Boston that rarely lives up to its name. After the death of her mother, she lives with her father, Bent, in the middle apartment of their triple decker home—Bent’s two sisters, Lucy and Desiree, live on the top floor. A former soldier turned policeman, Bent often works nights, leaving Libby under her aunts’ care. Shuffling back and forth between apartments—and the wildly different natures of her family—has Libby wishing for nothing more than a home of her very own.

Quinn Ellis is at a crossroads. When her husband John, who has served two tours in Iraq, goes missing back at home, suffering from PTSD he refuses to address, Quinn finds herself living in the first-floor apartment of the Winters house. Bent had served as her husband’s former platoon leader, a man John refers to as his brother, and despite Bent’s efforts to make her feel welcome, Quinn has yet to unpack a single box.

For Libby, the new tenant downstairs is an unwelcome guest, another body filling up her already crowded house. But soon enough, an unlikely friendship begins to blossom, when Libby and Quinn stretch and redefine their definition of family and home.

With gorgeous prose and a cast of characters that feel wholly real and lovably flawed, This Is Home is a nuanced and moving novel of finding where we belong.