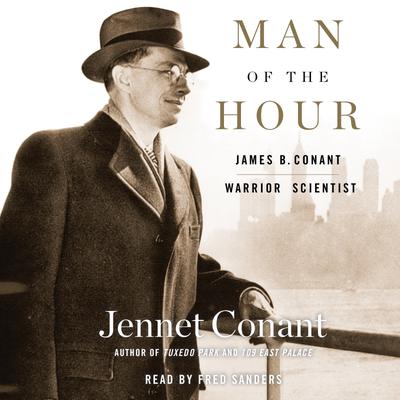 Man of the Hour

“Gripping…an outstanding portrait” (The Wall Street Journal) of one of the most influential men of the greatest generation, James B. Conant—a savvy architect of the nuclear age and the Cold War—told by his granddaughter, New York Times bestselling author Jennet Conant.

James Bryant Conant was a towering figure. He was at the center of the mammoth threats and challenges of the twentieth century. As a young eminent chemist, he supervised the production of poison gas in World War I. As a controversial president of Harvard University, he was a champion of meritocracy and open admissions. As an advisor to FDR, he led the interventionist cause for US entrance in World War II. During that war, Conant oversaw the development of the atomic bomb and argued that it be used against the industrial city of Hiroshima in Japan. Later, he urged the Atomic Energy Commission to reject the hydrogen bomb and devoted the rest of his life to campaigning for international control of atomic weapons. As Eisenhower’s high commissioner to Germany, he helped to plan German recovery and was an architect of the United States’ Cold War policy.

Now New York Times bestselling author Jennet Conant recreates the cataclysmic events of the twentieth century as her grandfather James experienced them. She describes the guilt, fears, and sometimes regret of those who invented and deployed the bombs and the personal toll it took. “A masterly account…a perceptive portrayal of a major player in world events throughout the mid-twentieth century” (Publishers Weekly), Man of the Hour is based on hundreds of documents and diaries, interviews with Manhattan Projects scientists, Harvard colleagues, and Conant’s friends and family, including her father, James B. Conant’s son. This is “a most serious work, well written and evocative of an era when the American foreign establishment exuded gravitas…[a] new, relentless, and personally invested account” (The New York Times Book Review).