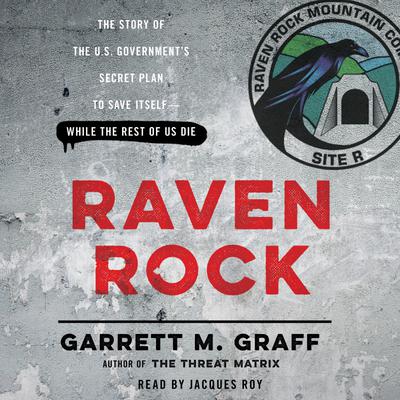 The Story of the U.S. Government's Secret Plan to Save Itself--While the Rest of Us Die

Now a 6-part mini-series called Why the Rest of Us Die airing on VICE TV!

The shocking truth about the government’s secret plans to survive a catastrophic attack on US soil—even if the rest of us die—is “a frightening eye-opener” (Kirkus Reviews) that spans the dawn of the nuclear age to today, and "contains everything one could possibly want to know" (The Wall Street Journal).

Every day in Washington, DC, the blue-and-gold first Helicopter Squadron, codenamed “MUSSEL,” flies over the Potomac River. As obvious as the Presidential motorcade, most people assume the squadron is a travel perk for VIPs. They’re only half right: while the helicopters do provide transport, the unit exists to evacuate high-ranking officials in the event of a terrorist or nuclear attack on the capital. In the event of an attack, select officials would be whisked by helicopters to a ring of secret bunkers around Washington, even as ordinary citizens were left to fend for themselves.

“In exploring the incredible lengths (and depths) that successive administrations have gone to in planning for the aftermath of a nuclear assault, Graff deftly weaves a tale of secrecy and paranoia” (The New York Times Book Review) with details "that read like they've been ripped from the pages of a pulp spy novel" (Vice). For more than sixty years, the US government has been developing secret Doomsday strategies to protect itself, and the multibillion-dollar Continuity of Government (COG) program takes numerous forms—from its potential to evacuate the Liberty Bell from Philadelphia to the plans to launch nuclear missiles from a Boeing-747 jet flying high over Nebraska. Garrett M. Graff sheds light on the inner workings of the 650-acre compound, called Raven Rock, just miles from Camp David, as well as dozens of other bunkers the government built for its top leaders during the Cold War, from the White House lawn to Cheyenne Mountain in Colorado to Palm Beach, Florida, and the secret plans that would have kicked in after a Cold War nuclear attack to round up foreigners and dissidents and nationalize industries. Equal parts a presidential, military, and cultural history, Raven Rock tracks the evolution of the government plan and the threats of global war from the dawn of the nuclear era through the War on Terror.