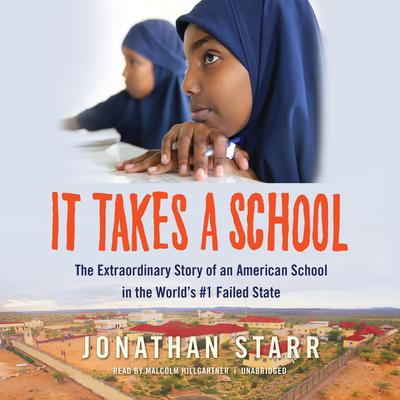 It Takes a School

A story of David and Goliath proportions, how an American hedge fund manager created a unique school in Somaliland whose students, against all odds, have come to achieve success beyond anyone's wildest dreamsJonathan Starr is not your traditional do-gooder, and in 2009, when he decided to found Abaarso, a secondary school in Somaliland, the choice seemed crazy to even his closest friends. Why, they wondered, would he turn down a life of relative luxury to relocate to an armed compound in a breakaway region of the world's #1 failed state? To achieve his mission, Starr would have to overcome profound cultural differences, broken promises, and threats to his safety and that of his staff. It Takes a School is the story of how an abstract vision became a transformative reality, as Starr set out to build a school in a place forgotten by the world. It is the story of a skeptical and clan-based society learning to give way to trust. And it is the story of the students themselves, including a boy from a family of nomads who took off on his own in search of an education and a girl who waged a hunger strike in order to convince her strict parents to send her to Abaarso.Abaarso has placed forty graduates and counting in American universities, from Harvard to MIT, and sends Somaliland a clear message: its children can compete with anyone in the world. Now the initial question Starr was asked demands another: "If such a success can happen in an unrecognized breakaway region of Somalia, can it not happen anywhere?"

Notice to our customers about It Takes a School