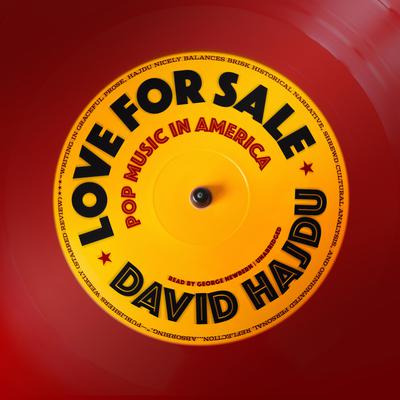 From revered music critic David Hajdu comes a personal, idiosyncratic history of popular music.David Hajdu begins Love for Sale, his personal history of recorded pop music, in an unexpected place-not with nostalgic reminiscences of the 45s of his youth but with the sheet music era at the end of the nineteenth century. It was not so much the beginning of popular music-many songs were already popular-as it was the beginning of the popular music industry. And if he's going to understand what his 45s meant to him, this is the place to start: the rise of Tin Pan Alley, of minstrelsy, of million-copy sellers and one-hit wonders, and of cultural arbiters decrying the baseness, simplicity, and signs of the end of times in popular music.From there, Hajdu takes us on more unexpected routes through the history of pop music-back to Alexander Graham Bell and the invention of records ... and to his grandmother's collection of Italian crooners on shellac records that young Hajdu liberated from her New Jersey basement. And neither Italians nor New Jersey are incidental to his story-not just because of Frank Sinatra but because Hajdu's mom, a waitress in a chrome-clad diner on Route 22, helped shape the fate of a budding young music critic by introducing him to one of the diner's most prominent patrons, the writer of the timeless song "I'm from New Jersey."Love for Sale does ultimately spin through more familiar territory-the Cotton Club, the rise of radio, the battle of disco versus punk for the soul of New York as Hajdu made his chops as a critic, the rise of hip-hop, and the current atomization of the music landscape-but it is always with a unique, insightful, and eloquently presented point of view, as one would expect from one of our most celebrated music critics.

Notice to our customers about Love for Sale