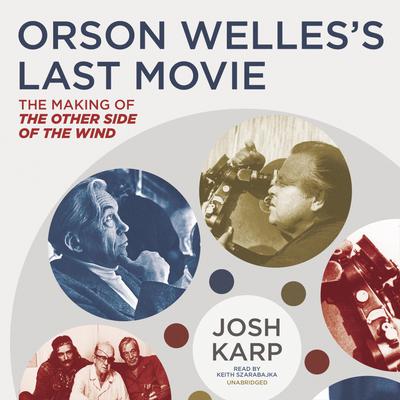 The Making of The Other Side of the Wind

In the summer of 1970, legendary but self-destructive director Orson Welles returned to Hollywood from years of self-imposed exile in Europe and decided it was time to make a comeback movie. It was about a legendary self-destructive director who returns to Hollywood from years of self-imposed exile in Europe. Welles swore it wasn't autobiographical.The Other Side of the Wind was supposed to take place during a single day, and Welles planned to shoot it in eight weeks. It took twelve years and remains unreleased and largely unseen.Orson Welles's Last Movie by Josh Karp is a fast-paced, behind-the-scenes account of the bizarre, hilarious, and remarkable making of what has been called "the greatest home movie that no one has ever seen." Funded by the shah of Iran's brother-in-law and based on a script that Welles rewrote every night for years, it was a final attempt to one-up his own best work. It's almost impossible to tell if art is imitating life or vice versa in the film. It's a production best encompassed by its star, John Huston, who described the making of the film as "an adventure shared by desperate men that finally came to nothing."

Notice to our customers about Orson Welles's Last Movie