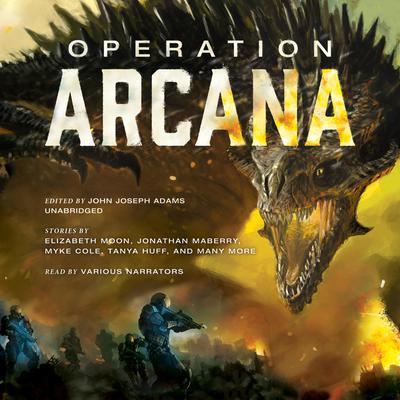 In the realms of fantasy, the battlefield is where heroism comes alive, magic is unleashed, and legends are made and unmade. From the War of the Ring, Tolkien’s epic battle of good versus evil, to the Battle of the Blackwater, George R. R. Martin’s grim portrait of the horror and futility of war, these fantastical conflicts reflect our highest hopes and darkest fears, bringing us mesmerizing visions of silver spears shining in the sun and vast hordes of savage beasts who threaten to destroy all that we hold dear. Now acclaimed editor John Joseph Adams is sounding the battle cry and sixteen of today’s top authors are reporting for duty, spinning never-before-published, spellbinding tales of military fantasy, including a Black Company story from Glen Cook, a Paksenarrion story from Elizabeth Moon, and a Shadow Ops story by Myke Cole. Within these pages you’ll also find World War I trenches cloaked in poison gas and sorcery, modern-day elite special forces battling hosts of the damned, and steampunk soldiers fighting for their lives in a world torn apart by powers that defy imagination. Featuring both grizzled veterans and fresh young recruits alike—including Tanya Huff, Simon R. Green, Carrie Vaughn, Jonathan Maberry, and Seanan McGuire—Operation Arcana is a must for any military buff or fantasy fan. You’ll never look at war the same way again.

Notice to our customers about Operation Arcana