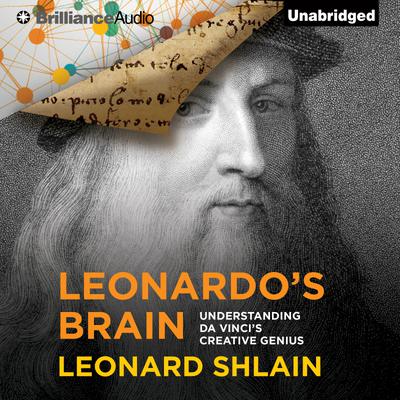 Bestselling author Leonard Shlain explores the life, art, and mind of Leonardo da Vinci, seeking to explain his singularity by looking at his achievements in art, science, psychology, and military strategy (yes), and then employing state of the art left-right brain scientific research to explain his universal genius. Shlain shows that no other person in human history has excelled in so many different areas as Da Vinci and he peels back the layers to explore the how and the why.

Leonardo’s Brain uses Da Vinci as a starting point for an exploration of human creativity. With his lucid style, and his remarkable ability to discern connections in a wide range of fields, Shlain brings the listener into the world of history’s greatest mind.

Shlain asserts that Leonardo’s genius came from a unique creative ability that allowed him to understand and excel in a wide range of fields. From here Shlain jumps off and discusses the history and current research on human creativity that revolves around the right brain-left brain split. Most of us now know that there is a split between the right and the left side of the brain; the left primarily controls our rational mind, the right our emotions.

Shlain discusses the cutting edge research that is refining our understanding of the split brain model and deepening our knowledge about the nature of human creativity. There is more integration between the left and right brains than previously thought. Shlain argues that Leonardo was unique in human history for the degree of integration that he showed. He also speculates on whether or not the qualities of Leonardo’s brain and his creativity presage the future evolution of man.

Leonardo’s Brain integrates art, history, science, medicine, neuroscience, psychology, and philosophy uniting all of the ideas that Leonard Shlain studied and wrote about since the publication of the influential and bestselling Art and Physics in 1991.