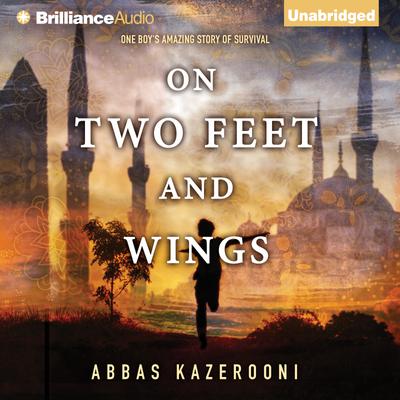 On Two Feet and Wings

He is in a foreign country, he is alone, and he is just a boy.…

Abbas Kazerooni is not yet ten, but he’s suddenly forced to leave his parents, his friends—his entire world—and flee Tehran. The Iran-Iraq war is at its bloodiest, and the Ayatollahs who rule Iran have reduced the recruitment age for the army. If Abbas doesn’t escape, it’s almost certain that he will be drafted and die fighting for a regime that has stripped his family of all they have.

On his own in the strange, often frightening city of Istanbul, Abbas grows up fast—with little more than his wits to guide him. He must conquer difficult things: how to live on his own, how to navigate a foreign city and culture when he doesn’t speak the language, and, most importantly, how to judge who is a friend and who is an enemy. Facing the unexpected as well as the everyday challenges of life on his own, Abbas walks a tightrope of survival—yearning to please the demanding father he has left behind, yet relishing his new found independence.

His quick thinking, entrepreneurial spirit, and the kindness of strangers allow him to make the best of his dire situation in surprising ways. Does he have what it takes to not only survive against these challenging odds but achieve his parents’ ultimate dream for him: a visa to England, and the safety it represents?

This compelling true story of one young boy’s courage provides a powerful child’s-eye view of war, political tumult, and survival.

"Readers of Abbas Kazerooni's incredible memoir will be rooting for him from the very first pages—and not be able to put this book down. His frank narrative is clear, compelling, and utterly endearing. An unforgettable story—I love this book!" —Naomi Shihab Nye, winner of the 2013 NSK Neustadt Prize in Children’s Literature

"This heart-stopping memoir of a young boy who fled Iran on his own after the 1979 Revolution left me wondering whether adults could be so resilient. Enormously inspiring on many levels!" –Suzanne Fisher Staples, author of Shabanu, a Newbery Honor Book

"Abbas Kazerooni offers the world a remarkable memoir as he tells of his escape from revolutionary Iran when he was just a young boy. Faced with the prospect of never seeing his parents again, he struggles to find his way in Istanbul, where survival often depends on his skill in knowing who to trust and when to flee. This is a compelling story full of tension and heartbreak." –Terry Farish, author of The Good Braider, Best Fiction for Young Adults 2013, the American Library Association