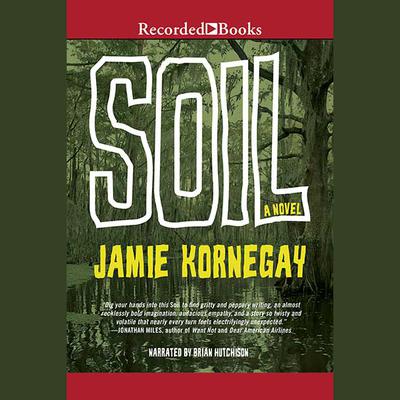 A darkly comic debut novel by an independent bookseller about an idealistic young farmer who moves his family to a Mississippi flood basin, suffers financial ruin-and becomes increasingly paranoid he's being framed for murder. It all began with a simple dream. An ambitious young environmental scientist hoped to establish a sustainable farm on a small patch of river-bottom land nestled among the Mississippi hills. Jay Mize convinced his wife Sandy to move their six-year-old son away from town and to a rich and lush parcel where Jacob could run free and Jay could pursue the dream of a new and progressive agriculture for the twenty-first century. He did not know that within a year he'd be ruined, that flood and pestilence would invade his fledgling farm or that his wife and son would leave him to pick up the pieces by himself. "Let us stand, brothers and sisters, to applaud the arrival of an exquisitely deranged new voice to American fiction. Dig your hands into this Soil to find gutty and peppery writing, an almost recklessly bold imagination, audacious empathy, and a story so twisty and volatile that nearly every turn feels electrifyingly unexpected. This rough-n-tumble model of Southern literature-the vehicle of choice for the late greats Barry Hannah, Larry Brown, Harry Crews, and William Gay-has felt stalled on the roadside for several years now; Jamie Kornegay just pulled up with some big-ass jumper cables." -Jonathan Miles, author of Want Not and Dear American Airlines "Jamie Kornegay's novel Soil heralds the arrival of an exciting new voice. This book is atmospheric 'as all get-out,' as my grandmother might have said, and it crackles with intensity. It's everything I want a novel to be, a fine story well-told with characters I won't forget, set in a world so real you can smell it and taste it. Kornegay's something special." -Steve Yarbrough, author of The Realm of Last Chances "Mississippi has done it again, given us yet another brilliant writer. Welcome, Jamie Kornegay, to a long line of kick-ass storytellers. Soil is one of the most memorable novels I've read in years, with a killer story told in killer language. Highly, highly recommended." -Tom Franklin, author of Crooked Letter, Crooked Letter "Jamie Kornegay's prose is as rich and fertile as the Mississippi Delta landscape that spreads across the pages of Soil. It is poetic, both in its language and in the soulful complexity of its characters, all of them fallen and trudging along the hard worn path of redemption on dirty hands and knees." -Michael F. Smith, author of Rivers "Marked by wry humor, unforgettable characters, and riveting suspense, Jamie Kornegay's Soil is a spellbinding Greek tragedy played out against the backdrop of the choked river-bottoms, sprawling fields, and dusty roads of the Mississippi Delta. A brilliant, haunting portrait of the havoc one desperate man's decisions and dreams can wreak upon himself and those around him. This remarkable novel springs from rich earth indeed, and the end result is a book that will leave readers reeling." -Skip Horack, author of The Eden Hunter, and The Southern Cross "A darkly droll, epic novel told in a style I'd have to call a deceptively swift amble through a most vividly rendered, watery Delta world. Anyone from Coleridge to Twain to Faulkner to William Gay would have loved reading this book, and you will, too." -Brad Watson, author of The Heaven of Mercury and Aliens in the Prime of Their Lives