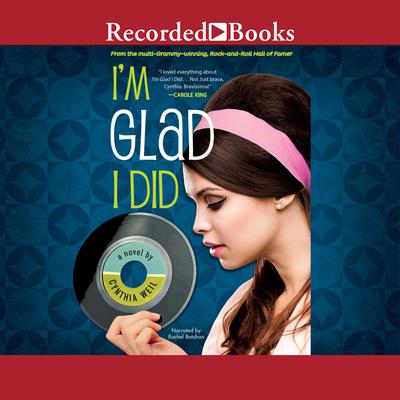 I'm Glad I Did

"Mad Men "meets "Nashville" in this debut mystery set in 1963, written by Grammy winner and Rock and Roll Hall of Famer Cynthia Weil. It's the summer of 1963 and JJ Green is a born songwriter--which is a major problem, considering that her family considers the music business a cesspool of lowlifes and hustlers. Defying them, she takes an internship at the Brill Building, the epicenter of a new sound called rock and roll. JJ is finally living her dream. She even finds herself a writing partner in Luke Silver, a boy with mesmerizing green eyes who seems to connect instantly with her music. Best of all, they'll be cutting their first demo with Dulcie Brown, a legend who's fallen on hard times. Though Dulcie is now a custodian in the Brill Building, JJ is convinced that she can shine again. But Dulcie's past is a tangle of secrets, and when events take a dark turn, JJ must navigate a web of hidden identities and shattered lives--before it snares her, too. Cynthia Weil is a member of the Rock and Roll and Songwriters Halls of Fame, as well as the multi-Grammy winning songwriter of classic songs like "On Broadway," "We Gotta Get Out of This Place," "You've Lost That Lovin' Feeling" (the most performed song of the 20th century), and "Somewhere Out There," which was a double Grammy winner and Oscar nominee. She has lived in Southern California for many years with her husband and writing partner, Barry Mann. "I'm Glad I Did" is her first novel.