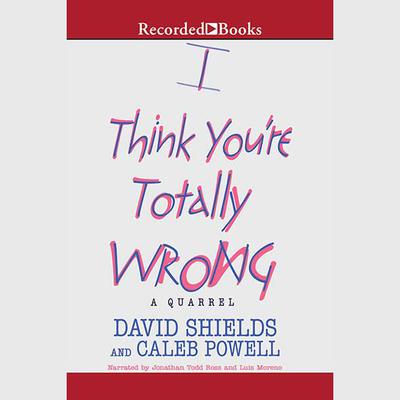 I Think You're Totally Wrong

A debate, nearly to the death, about life and art, cocktails included. And a soon-to-be major motion picture from James Franco! Caleb Powell always wanted to become an artist, but he overcommitted to life (he' s a stay-at-home dad to three young girls), whereas his former professor David Shields always wanted to become a human being, but he has overcommitted to art. Shields and Powell spend four days together in a cabin in the Cascade Mountains, playing chess, shooting hoops, hiking to lakes and an abandoned mine; they rewatch My Dinner with AndrE, Sideways, and The Trip, relax in a hot tub, and talk about everything they can think of in the name of exploring and debating their central question: life and/or art. The relationship-- and the balance of power-- between Shields and Powell is in constant flux, as two egos try to undermine each other, two personalities overlap and collapse. This book seeks to demolish the Q&A format; it also seeks to confound, as much as possible, the divisions between " reality" and " fiction," between " life" and " art." There are no teachers or students, no interviewers or interviewees, no masters in the universe, only a chasm of uncertainty. David Shields is the author of 16 books, including The Thing About Life Is That One Day You' ll Be Dead and Salinger, both NYT bestsellers; Reality Hunger; How Literature Saved My Life; and Black Planet. He lives with his wife and daughter in Seattle, where he is the Miliman Distinguished Writer-in-Residence at the University of Washington. Caleb Powell, who grew up in the Pacific Northwest, has played bass in a band, worked construction, and spent ten years teaching ESL and studying foreign languages on six continents. He' s published stories and essays in Descant, Post Road and Zyzzyva. He' s now a stay-at-home father in Seattle.