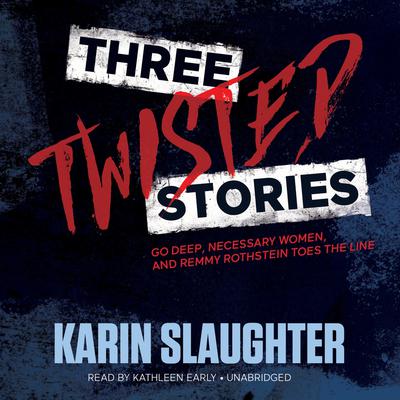 This genre-bending collectionproves that not only is Karin Slaughter “one of the best crime novelists inAmerica” (Washington Post), she’s one of today’s very best writers—period.From the hallucinatory noir novella “Go Deep” to the twisted short stories“Necessary Women” and “Remmy Rothstein Toes the Line,” this collectionshowcases the New York Times bestselling author’s dark humor, limitlessimagination, and masterly command of voice and character.

Growing up dirt poor,Charlie Lam worked his ass off to make something of himself, no thanks to hisdeadbeat father or his long-suffering mother. And now a lot of people depend onCharlie: by his last count, sixty-eight employees at his Atlanta autodealership, eleven shiftless brothers and sisters, an ungrateful wife, aspoiled daughter, and a shameless girlfriend. Who could really blame him forwanting a little extra?

The arrangement issimple: Charlie picks up a suit from the dry cleaner’s. In the suit pocket isthe name of a very important man. The next day, that man walks into thedealership, drives out in a new car, and Charlie gets a fat envelope full ofcash. Everyone’s happy. No one gets hurt—so long as Charlie doesn’t cross hisbusiness partner. But with one twist of the knife, the unthinkable happens, andsuddenly Charlie is in deeper trouble than he could have possibly imagined.

In a border town betweenGeorgia and Alabama, in a three-room house made of cement block, afourteen-year-old girl watches her mother die. Her father is a long-haultrucker, away for weeks, sometimes months, at a time. Her mother, with twomenial jobs cleaning restrooms and working nights at the laundry, had been justthirty.

A week before she died, noticingher daughter getting attention from a boy, the girl’s mother warned her not tomake the same mistakes she did. Now, her father tells her, she’s the woman ofthe house, and she must do all the necessary things the woman must do: thecleaning, the cooking, the laundry. But there’s a lot more to being a womanthan fixing dinner and doing the wash. Her mother was right: she won’t end uplike her—and she’ll do anything to prove it.

As an intrepidadjudicator of world records, Mindy Patel has met lots of strange people inlots of strange places. But they’re no match for the Swampers of the Georgiabayou. Mindy has braved the oppressive August heat in search of RemmyRothstein, who they call the “Cajun Jew.” If the photos are indeed accurate,she might be about to certify Remmy as the world-record holder for longest tongue in the world … and maybe even the widest!

First Mindy meets Remmy’shalf-brother, Buell Rabinowitz, surely the world’s only one-legged, albino,Jewish African American. Then she makes the acquaintance of Remmy’s mother, afoul-mouthed old woman with an impressive beard. None of this prepares her foran eyeful of Remmy: a man who measures up to his singular reputation in waysthat will change the course of Mindy’s life.

Notice to our customers about Three Twisted Stories