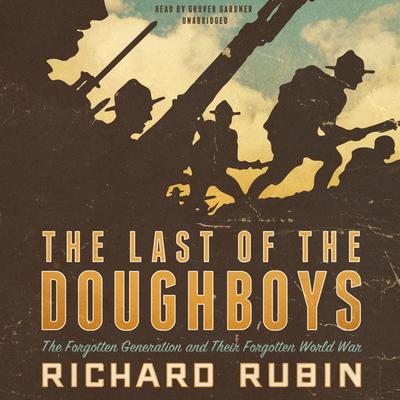 The Last of the Doughboys

The Forgotten Generation and Their Forgotten World War

In 2003, eighty-five years after the armistice, it tookRichard Rubin months to find just one living American veteran of World War I.But then, he found another. And another. Eventually he found dozens, aged 101to 113, and interviewed them. All are gone now.

A decade-long odyssey to recover the story of a forgottengeneration and their war led Rubin across the United States and France, througharchives, private collections, battlefields, literature, propaganda, and evenmusic. But at the center of it all were the last of the last, the men and womenhe met: a new immigrant, drafted and sent to France, whose life was saved by ahorse; a Connecticut Yankee who volunteered and fought in every major Americanbattle; a Cajun artilleryman nearly killed by a German airplane; an eighteen-year-oldBronx girl “drafted” to work for the War Department; a machine gunner fromMontana; a marine wounded at Belleau Wood; the sixteen-year-old who becameAmerica’s last World War I veteran; and many more.

They were the final survivors of the millions who made up the AmericanExpeditionary Forces, nineteenth-century men and women living in thetwenty-first century. Self-reliant, humble, and stoic, they kept their storiesto themselves for a lifetime, then shared them at the last possible moment sothat they, and the war they won—the trauma that created our modern world—mightat last be remembered. You will never forget them. The Last of the Doughboysis more than simply a war story; it is a moving meditation on character, grace,aging, and memory.

Notice to our customers about The Last of the Doughboys