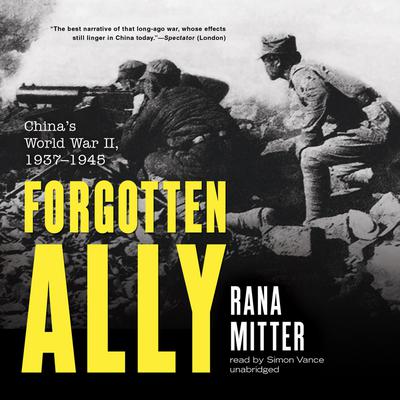 Rana Mitterfocuses his gripping narrative on three towering leaders: Chiang Kai-shek, thepolitically gifted but tragically flawed head of China’s Nationalistgovernment; Mao Zedong, the Communists’ fiery ideological stalwart, seen hereat the beginning of his epochal career; and the lesser-known Wang Jingwei, whocollaborated with the Japanese to form a puppet state in occupied China.Drawing on Chinese archives that have only been unsealed in the past ten years,he brings to vivid new life such characters as Chiang’s American chief ofstaff, the unforgettable “Vinegar Joe” Stilwell, and such horrific events asthe Rape of Nanking and the bombing of China’s wartime capital, Chongqing.Throughout, Forgotten Ally showshow the Chinese people played an essential role in the wider war effort, atgreat political and personal sacrifice.

Forgotten Ally rewrites the entire history of World WarII, yet it also offers surprising insights into contemporary China. Notwentieth-century event was as crucial in shaping China’s worldview, and no onecan understand China, and its relationship with America today, without thisdefinitive work.

Notice to our customers about Forgotten Ally