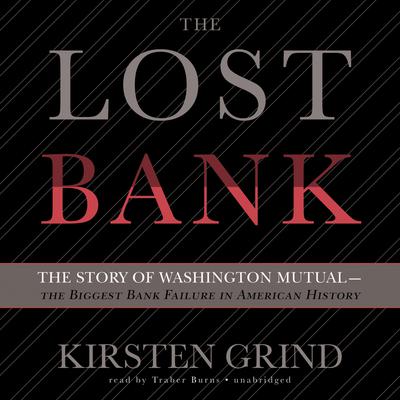 During the most dizzying days of the financial crisis, Washington Mutual, a bank with hundreds of billions of dollars in its coffers, suffered a crippling bank run. The story of its final, brutal collapse in the autumn of 2008, and its controversial sale to JPMorgan Chase, is an astonishing account of how one bank lost itself to greed and mismanagement and how the entire financial industry—and even the entire country—lost its way as well.

Kirsten Grind’s The Lost Bank is a magisterial and gripping account of these events, tracing the cultural shifts, the cockamamie financial engineering, and the hubris and avarice that made this incredible story possible. The men and women who become the central players in this tragedy—the regulators and the bankers, the home buyers and the lenders, the number crunchers and the shareholders—are heroes and villains, perpetrators and victims, often switching roles with one another as the drama unfolds.

Reporting for the Puget Sound Business Journal, Grind covered the story from the beginning. It was a story set far from the epicenters of finance and media, happening largely in places such as the suburban homes of central California and the office buildings of Seattle, but the clarity and depth of Grind’s work earned her many awards, including being named a finalist for the Pulitzer Prize and the Gerald Loeb Award. She takes readers into boardrooms and bedrooms, revealing the power struggles that pitted regulators at the Office of Thrift Supervision and the FDIC against one another and the predatory negotiations of investment bankers and lawyers who enriched themselves during the bank’s rise and then devoured the decimated bank in its final days.

Written as compellingly as the finest fiction, The Lost Bank makes it clear that the collapse of Washington Mutual was not just the largest bank failure in American history. It is a story of talismanic qualities, reflecting the incredible rise and the precipitous collapse of not only an institution but of trust, fortunes, and the marketplaces for risk across the world.

Notice to our customers about The Lost Bank