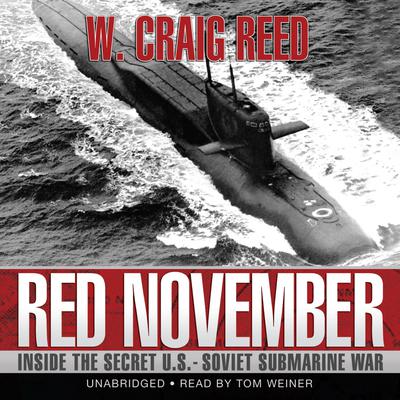 Inside the Secret U.S.-Soviet Submarine War

Few know how close the world has come to annihilation better than the warriors who served America during the tense, forty-five-year struggle known as the Cold War. Yet for decades, their work has remained shrouded in secrecy. Now, in this riveting history, W. Craig Reed, a former navy diver and fast-attack submariner, provides an eye-opening, pulse-pounding narrative of the underwater struggles and espionage operations between the US and the USSR that brought us to the brink of nuclear war more than once.

Red November is filled with hair-raising, behind-the-scenes stories that take you deep beneath the surface and into the action during the entire Cold War period from 1946 through 1992. Reed served aboard submarines involved in espionage operations, and his father was a top military intelligence specialist intimately involved in the Cuban Missile Crisis. Reed is one of the first authors to obtain so many in-depth interviews with dozens of navy divers, espionage operatives, submariners, and government officials on both sides (including several Soviet submarine captains) about the most daring and decorated missions of the conflict, including top-secret Ivy Bells, Boresight, Bulls Eye, and Holystone operations.

Transcending traditional submarine, espionage, and Cold War accounts, Red November is an up-close examination of one of the most dangerous times in world history and an intimate look at the men and women who participated in our country’s longest and most expensive underwater war.

Notice to our customers about Red November