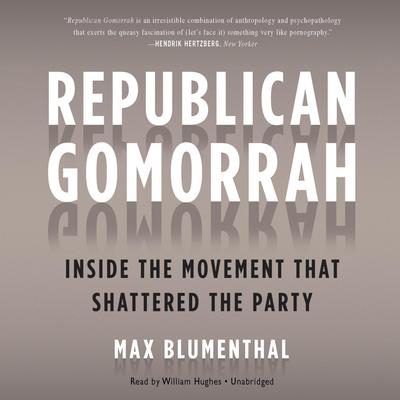 Inside the Movement That Shattered the Party

This is a crackling, spicy, and investigative portrait of the freaky and theocratic fringe elements within the conservative movement who are now calling the shots in the post-Bush GOP—and a roadmap to understanding the politics of personal crisis and redemption that unites them.

Republican Gomorrah is a bestiary of dysfunction, scandal, and sordidness from the dark heart of the forces that now have a leash on the party. It shows how those forces are the ones that establishment Republicans, like John McCain, have to bow to if they have any hope of running for president. It shows that Sarah Palin was the logical choice of a party in the control of theocrats. But more than just an exposé, Republican Gomorrah shows that many of the movement’s leading figures have more in common than just the power they command within conservative ranks. Their personal lives have been stained by crisis and scandal: depression, mental illness, extramarital affairs, struggles with homosexual urges, heavy medication, addiction to pornography, serial domestic abuse, and even murder.

Inspired by the work of psychologist Erich Fromm, who asserted that the fear of freedom propels anxiety-ridden people into authoritarian settings, Blumenthal explains in a compelling narrative how a culture of personal crisis has defined the radical right, transforming the nature of the Republican Party for the next generation and setting the stage for the future of American politics.

Notice to our customers about Republican Gomorrah