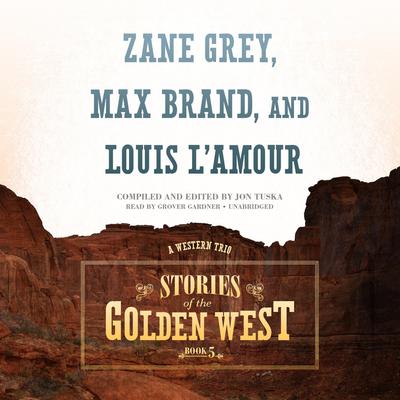 Stories of the Golden West, Book 5

A collection of classicWestern tales

SmokeBellew enters a remote Mormon settlement only a jump ahead of a posse. Findingemployment as a ranch hand working for a dowager Mormon, Smoke finds that hislife undergoes a transformation and he is able to make her ranch a financialsuccess, at the same time falling in love with her wanton daughter, Rebecca.But it is too good to last. The law follows him.

YoungMary Valentine—upstart, tomboy, and general troublemaker—is seeking to protecta man wanted by the law. To complicate her life even further, her two cousins,who have been dodging the law, return home and decide with their father to jointhe notorious Markle gang in holding up the local bank.

“Showdownon the Hogback” by Louis L’Amour

Tom Kedrick is hired by a financial syndicate to runoff a gang of vagrants and outlaws from a certain strip of land. Kedrick setsout to serve justice, but to his dismay, these “vagrants and outlaws” turn outto be hard working ranchers and farmers also claiming the land.

Notice to our customers about Stories of the Golden West, Book 5