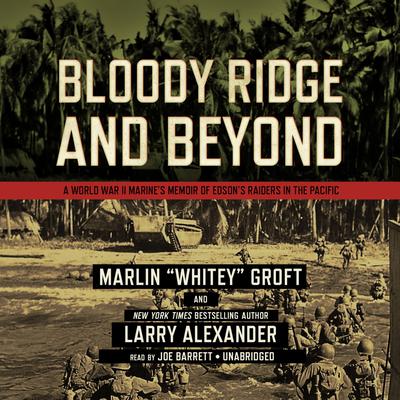 Bloody Ridge and Beyond

A story of sacrifice and defiance at Guadalcanal, from the New York Times bestselling coauthor of A Higher Call and Biggest Brother

On the killing ground that was the island of Guadalcanal, a two-thousand-yard-long ridge rose from the jungle canopy. Behind it lay the all-important air base of Henderson Field. And if Henderson Field fell, it would mean the almost certain death or capture of all 12,500 marines on the island.

But the marines positioned on the ridge were no normal fighters—they were the hard-fighting men of Edson's Raiders, an elite fighting unit within an already elite Marine Corps. Handpicked for their toughness and submitted to a rigorous training program to weed out those less fit, they were the best of the best.

For two hellish nights in September 1942, about 840 marines—commanded by Lieutenant Colonel Merritt Austin "Red Mike" Edson—fought one of the most pivotal battles of World War II in the Pacific, clinging desperately to their position on what would soon be known as Bloody Ridge.

Wave after wave of attacking Japanese soldiers were repelled by the Raiders, who knew that defeat and retreat were simply not options. In the end, and against all odds, the defenders prevailed.

Bloody Ridge and Beyond is the story of the First Marine Raider Battalion, which showed courage and valor in the face of overwhelming numbers, as told by Marlin Groft, a man who was a member of this incredible fighting force.

Notice to our customers about Bloody Ridge and Beyond