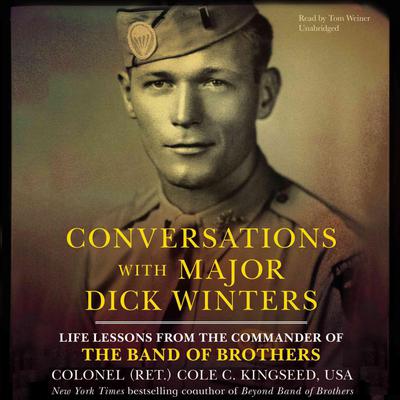 Life Lessons from the Commander of the Band of Brothers

On the hellishbattlefields of World War II Europe, Major Dick Winters led his EasyCompany—the now-legendary Band of Brothers—from the confusion and chaos of theD-day invasion to the final capture of Hitler’s Eagle’s Nest.

But Winters’ storydidn’t end there; it was only the beginning.

He was a quiet, reluctant hero whose modesty and strengthdrew the admiration of not only his men but millions worldwide. Now comes thestory of Dick Winters in his last years as witnessed and experienced by hisgood friend Cole C. Kingseed.

Kingseed shares the formative experiences that made Winterssuch an effective leader. He addresses Winters’ experiences and leadershipduring the war; his intense, unbreakable devotion to his men; his search forpeace, both without and within, after the war; and how fame forced him to makeadjustments to an international audience of well-wishers and admirers, even ashe attempted to leave a lasting legacy before joining his fallen comrades.Following Winters’ death on January 2, 2011, the outpouring of grief andadulation for one of this nation’s preeminent leaders of character, courage,and competence shows just how great a mark he left on the world.

This is a story of leadership, fame, and friendship and thejourney of one man’s struggle to find the peace that he promised himself if hesurvived World War II.

Notice to our customers about Conversations with Major Dick Winters