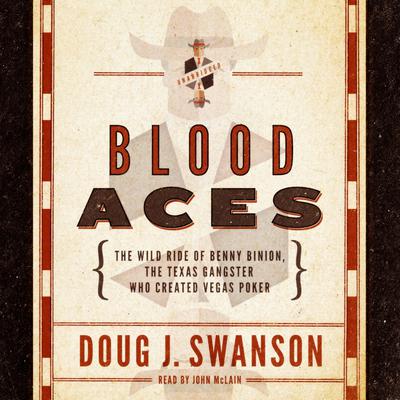 The Wild Ride of Benny Binion, the Texas Gangster Who Created Vegas Poker

The astonishingstory of Benny Binion—a rip-roaring saga of murder, money, and the making ofLas Vegas

Benny Binion was many things: a cowboy, a pioneering casinoowner, a gangster, a killer, and founder of the hugely successful World Seriesof Poker. Blood Aces tells the story of Binion’s crucial role in shapingmodern Las Vegas. From a Texas backwater, Binion rose to prominence on acombination of vision, determination, and brutal expediency. His formula wassimple: run a good business, cultivate the big boys, kill your enemies, and ownthe cops. Through a mix of cold-bloodedness, native intelligence, folksiness, andphilanthropy, Binion became one of the most revered figures in the history ofgambling, and his showmanship, shrewdness, and violence would come to dominatethe Vegas scene.

Veteran journalist Doug J. Swanson uses once-secretgovernment documents and dogged reporting to show how Binion destroyed hisrivals and outsmarted his adversaries—including J. Edgar Hoover. As fast pacedas any thriller, Blood Aces tells a story that is unmatched in theannals of American criminal justice, a vital yet untold piece of this country’shistory.

Notice to our customers about Blood Aces