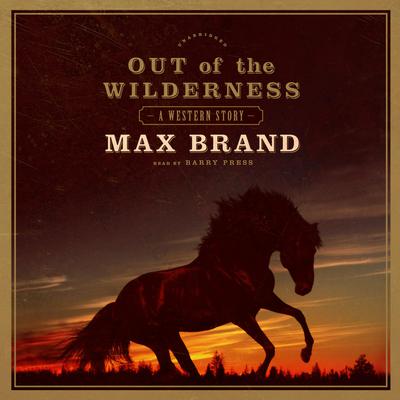 Out of the Wilderness

Peter Dunstan is a big rancher who wants to become bigger,to control more land. So when he buys Dr. Henry Morgan’s ranchland that hasbeen unsuccessfully converted to farming, it is his intention to return it toopen range. The only stipulation the doctor makes is that Dunstan must retainSandy Sweyn, who has more or less been Dr. Morgan’s ward. Though the man is ofage, he is generally considered a half-wit, even by the doctor. Still, Sandyhas a fabulous gift: he can communicate with animals. The most refractory andsavage bronco will yield to his subtly persuasive methods even when experthorse breakers have failed.

After Sandy gentles the totally recalcitrant gelding that Dunstanhas been trying to break to the reins, he claims that his mare, Cleo, though used onlyfor drudgery, could easily outrun the gelding in a race. Dunstan is socontemptuous of this boast that he bets $5,000 and ownership of the gelding ifhe loses the race. As it turns out, Cleo readily wins.

Rather than indulging his anger, Dunstan decides to use Sandy’sgifts to his advantage by getting him seemingly impossible tasks. The problem isthat after each of these incredible tasks is accomplished, some personalmisfortune befalls Dunstan. Finally Dunstan drives Sandy into the mountainwilderness, where his prowess eventually becomes legendary. But banishment isno solution for Dunstan when he comes to need Sandy more than ever, and hisonly way of getting him back is to resort to trickery.

Notice to our customers about Out of the Wilderness