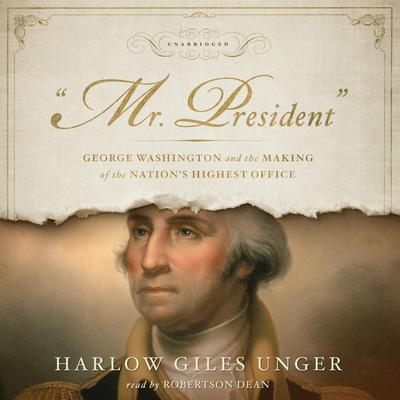 George Washington and the Making of the Nation’s Highest Office

Although the framers gave the president little authority,Washington knew whatever he did would set precedents for generations of hissuccessors. To ensure their ability to defend the nation, he simply ignored theConstitution when he thought it necessary and reshaped the presidency into whatJames Madison called a “monarchical presidency.” Modern scholars call it the“imperial presidency.”

A revealing new look at the birth of American government, “Mr.President” describes George Washington’s assumption of office in atime of continual crisis, as riots, rebellion, internecine warfare, and attacksby foreign enemies threatened to destroy the new nation. Drawing on raredocuments and letters, Unger shows how Washington combined political cunning,daring, and sheer genius to seize ever-widening powers to solve each crisis.

In a series of brilliant but unconstitutional maneuvers,Washington forced Congress to cede control of the four pillars of executivepower: war, finance, foreign affairs, and law enforcement. Then, in the absenceof Congress, he sent troops to fight Indian wars, crush tax revolts, and putdown threats of secession by three states.

Constantly weighing preservation of the Union againstpreservation of individual liberties and states’ rights, Washington assumedmore power with each crisis. Often only a breath away from reestablishing thetyranny he pledged to destroy in the Revolutionary War, he imposed law andorder across the land while ensuring individual freedom and self-government.

Notice to our customers about “Mr. President”