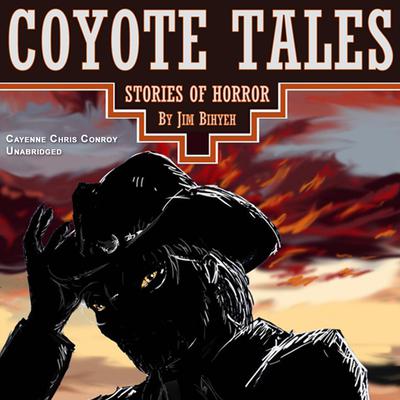 Wide Reeds, Arizona, is a small town on the Navajo reservation that you won’t find on any tourist map. The people who live there keep their secrets, their dreams, and their fears to themselves. But when a stranger with gold and turquoise eyes hitchhikes into town, the people of Wide Reeds learn that their secrets are no longer safe. Coyote (Mą’ii)—the trickster, thief, warrior, wizard, coward, clown, and savior—has come to call; and over the course of a year, life becomes strangely wonderful and terrifying.

In nine short stories and a novella that have been called part Sherman Alexie and part Stephen King, Coyote Tales leads listeners through the harsh and beautiful world of the modern Navajo Nation. Tracing the traditional yearly cycle of Early Dawn, Blue Daylight, and Evening Twilight, the separate paths of each story lead to the same Folding Darkness. And the only way out of that darkness is to follow the tracks of Coyote.

A young boy with a monster living under his bed learns from Coyote that most monsters are far worse than the ones that go bump in the night.

After Coyote reveals her hidden powers, a teenage girl must decide whether she will use them to save or destroy her community.

A tragic schoolyard shooting invites a strange creature who sets up camp next to the local cemetery, where he goes to visit the dead so that he may live a few days longer.

The Speed of Lightning

In this novella, Shaun Sallabye, a famous high school runner, gets a shot of talent from Coyote that will push him to his limits—if it doesn’t break him first.

Jesse Benally is coming home to the Reservation. He doesn’t believe in witchcraft, but when his Aunt Bonita is afflicted with a strange sickness, he must meet with the local medicine man, who teaches Jesse that native witches don’t care what he believes in and what he doesn’t.

Fernando Gishi waits for his father to get out of prison and rejoin his family. But after he finds the body of a dead girl in the desert, he must rely on his friends as a dark force reaches out to make a deal. And it’ll be a deal that he can’t refuse.

Nellie Begay, a former combat nurse, is missing her daughter. When a supernatural force might know where she is, Nellie must find the strength to heal herself and talk to Changing Woman.

Ronnie Long, a maintenance worker barely making ends meet, will have to look to his girlfriend and their unborn child in order to forgive the biggest mistake of his life—before it kills him.

Remember by Your Scars

Jane Lewis is a white nurse who fled the East coast and the scars of abusive relationships. When her latest ends, a new man walks into her life and reopens all the scars she’s tried to hide.

LeCaine Keeyahani hates working fast food but he hates the idea of leaving the Reservation even more. When his dying grandfather asks for LeCaine to help him end his life with dignity, only the Bathroom People hold the answer to LeCaine’s future.

Notice to our customers about Coyote Tales