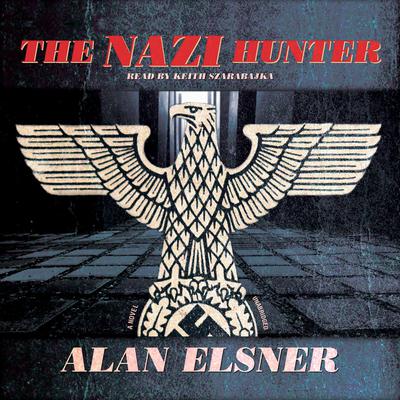 Brimming with surprising characters, chilling political revelations, and a heart-pounding climax, The Nazi Hunter is a thrilling debut and “an action-packed story” (Jewish Book World).

A gripping thriller, The Nazi Hunter mixes fierce partisan Washington politics, the search for ex-Nazi criminals, and a crazed, right-wing militia intent on bringing down the government. Nicknamed “the Nazi Hunter,” Marek Cain, deputy director of the Office of Special Investigations at the Justice Department, has for ten years been the point man for tracking down ex-Nazis who have fraudulently entered the United States since World War II and bringing them to justice.

Late one afternoon, a distraught German woman eludes security and slips into Cain’s office. “I have documents,” she says, “important documents only for the Nazi Hunter.” She promises to bring them the next day. When she doesn’t show, he dismisses her as just another crackpot. But when he reads in the Washington Post the next morning that the woman has been brutally murdered, he senses he’s on to something big. He must find those documents. The trail leads from Washington to Miami, to Boston, to Germany and Ukraine, and eventually to the Belzec extermination camp in Poland, where half a million Jews were murdered in the winter of 1942.

The Nazi Hunter is a thriller that combines romance, political intrigue, music, religion, and culture. Meticulously researched, it takes the reader on an intellectual journey into the seamy side of Washington, the heart of darkness in Europe and the lair of America’s fascist militias. Nobody who reads it will fail to be entertained, amused, and profoundly moved.

Notice to our customers about The Nazi Hunter