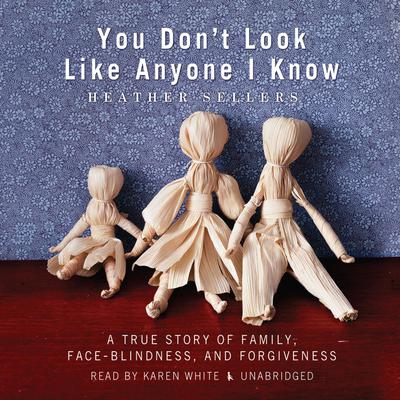 A True Story of Family, Face Blindness, and Forgiveness

This is an unusual and uncommonly moving family memoir, with a twist that gives new meaning to hindsight, insight, and forgiveness.

Heather Sellers is face-blind—that is, she has prosopagnosia, a rare neurological condition that prevents her from reliably recognizing people’s faces. Growing up, unaware of the reason for her perpetual confusion and anxiety, she took what cues she could from speech, hairstyle, and gait. But she sometimes kissed a stranger, thinking he was her boyfriend, or failed to recognize even her own father and mother. She feared she must be crazy.

Yet it was her mother who nailed windows shut and covered them with blankets, made her daughter walk on her knees to spare the carpeting, and had her practice secret words to use in the likely event of abduction. Her father went on weeklong “fishing trips” (a.k.a. benders), took in drifters, and wore panty hose and bras under his regular clothes. Heather clung to a barely coherent story of a “normal” childhood in order to survive the one she had.

That fairy tale unraveled two decades later when Heather took the man she would marry home to meet her parents and began to discover the truth about her family and about herself. As she came at last to trust her own perceptions, she learned the gift of perspective: that embracing the past as it is allows us to let it go. She illuminated a deeper truth—that even in the most flawed circumstances, love may be seen and felt.