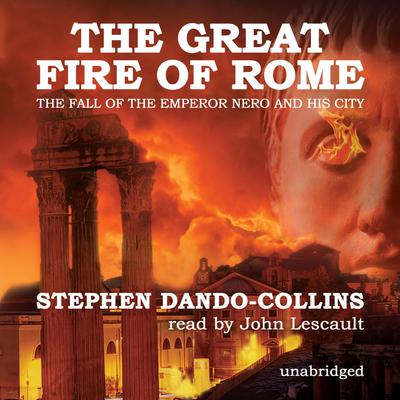 The Great Fire of Rome

The Fall of the Emperor Nero and His City

In 64 AD, on the night of July 19, a fire began beneath the stands of Rome’s great stadium, the Circus Maximus. The fire would spread over the coming days to engulf much of the city of Rome. From this calamity, one of the ancient world’s most devastating events, legends grew: that Nero had been responsible for the fire, and fiddled while Rome burned, and that Nero blamed the Christians of Rome, burning them alive in punishment, making them the first recorded martyrs to the Christian faith at Rome.

The Great Fire of Rome opens at the beginning of 64 AD and follows the events in and around Rome as they unfold in the seven months leading up to the great fire. As the year progresses we learn that the infamous young emperor Nero, who was twenty-six at the time of the fire, is celebrating a decade in power. Yet the palace is far from complacent, and the streets of Rome are simmering with talk of revolt.

Dando-Collins introduces the fascinating cavalcade of historical characters who were in Rome during the first seven months of 64 AD and played a part in the great drama. Using ancient sources, as well as modern archaeology, Dando-Collins describes the fire itself and its aftermath, as Nero personally directed relief efforts and reconstruction.

The Great Fire of Rome is an unforgettable human drama that brings ancient Rome and the momentous events of 64 AD to scorching life.

Notice to our customers about The Great Fire of Rome