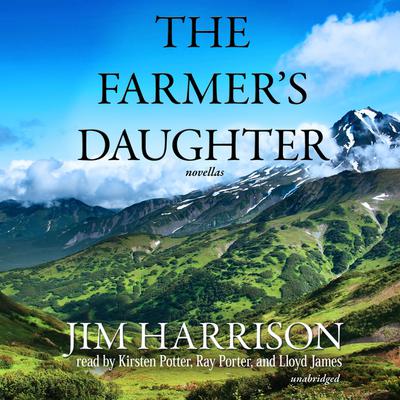 Jim Harrison’s numerous works have established him as one of the most beloved and popular authors in American fiction. His novel The English Major was a National Indie Bestseller, a New York Times Book Review Notable Title, and a San Francisco Chronicle Best Book of the Year. This collection of novellas finds him writing at the height of his powers—and in fresh and audacious new directions.

The three stories in The Farmer’s Daughter are as different as they are unforgettable. Written in the voice of a home-schooled fifteen-year-old girl in rural Montana, the title novella is an uncompromising, beautiful tale of an extraordinary character whose youth intersects with unexpected brutality and the reserves she must draw on to make herself whole. In another, Harrison’s beloved recurring character Brown Dog, still looking for love, escapes from Canada back to the States on the tour bus of an Indian rock band called Thunderskins. And finally, a retired werewolf, misdiagnosed with a rare blood disorder brought on by the bite of a Mexican hummingbird, attempts to lead a normal life but is nevertheless plagued by hazy, feverish episodes of epic lust, physical appetite, athletic exertions, and outbursts of violence under the full moon.

The Farmer’s Daughter is a memorable portrait of three decidedly unconventional American lives. With wit, poignancy, and an unbounded love for his characters, Jim Harrison has again reminded us why he is one of the most cherished and important authors at work today.

Notice to our customers about The Farmer’s Daughter