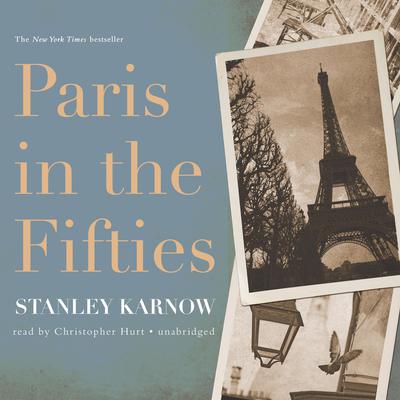 Paris in the Fifties

In June 1947, fresh out of college and long before he would win the Pulitzer Prize and become known as one of America’s finest historians, Stanley Karnow boarded a freighter bound for France, planning to stay for the summer. He stayed for ten years, first as a student and later as a correspondent for Time magazine. By the time he left, Karnow knew Paris so intimately that his French colleagues dubbed him “le plus parisien des Américains”—the most Parisian American.

Now, Karnow returns to the France of his youth, perceptively and wittily illuminating a time and place like no other. Karnow came to France at a time when the French were striving to return to the life they had enjoyed before the devastation of World War II. Yet even during food shortages, political upheavals, and the struggle to come to terms with a world in which France was no longer the mighty power it had been, Paris remained a city of style, passion, and romance.

Paris in the Fifties transports us to Latin Quarter cafés and basement jazz clubs, to unheated apartments and glorious ballrooms. We meet such prominent political figures as Charles de Gaulle and Pierre Mendès-France, as well as Communist hacks and the demagogic tax rebel Pierre Poujade. We get to know illustrious intellectuals—among them Jean-Paul Sartre, Simone de Beauvoir, Albert Camus, and André Malraux—and visit the glittering salons where aristocrats with exquisite manners mingled with trendy novelists, poets, critics, artists, composers, playwrights, and actors. We meet Christian Dior, who taught Karnow the secrets of haute couture, and Prince Curnonsky, France’s leading gourmet, who taught the young reporter to appreciate the complexities of haute cuisine. Karnow takes us to marathon murder trials in musty courtrooms, accompanies a group of tipsy wine connoisseurs on a tour of the Beaujolais vineyards, and recalls the famous automobile race at Le Mans when a catastrophic accident killed more than eighty spectators. Back in Paris, Karnow hung out with visiting celebrities like Ernest Hemingway, Orson Welles, and Audrey Hepburn, and in Paris in the Fifties we meet them too.

A veteran reporter and historian, Karnow has written a vivid and delightful history of a charmed decade in the greatest city in the world.

Notice to our customers about Paris in the Fifties