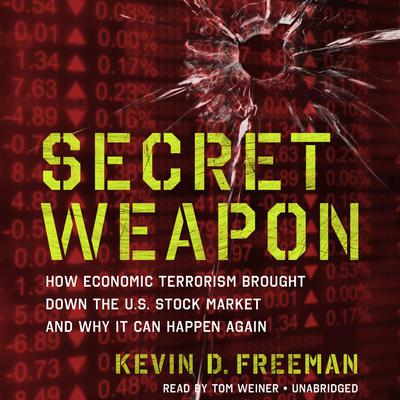 How Economic Terrorism Brought Down the U.S. Stock Market and Why It Can Happen Again

Who’s really to blame for America’s catastrophic financial meltdown and devastating national recession? Contrary to what the “Occupy Movement” might tell you, it’s not greedy Wall Street executives. No, as one of America’s top financial professionals reveals in this shocking book, the real culprit is economic warfare, with our foreign enemies exploiting our lurking financial weaknesses. In Secret Weapon, Kevin Freeman unveils how all the evidence—including motive, means, and opportunity—points to America’s foreign enemies deliberately pushing our economy over the brink.

In this stunning exposé, Freeman reveals:

In Secret Weapon you’ll learn what our enemies know and what the Obama administration has chosen to ignore—that our financial system is profoundly vulnerable to financial terrorism and that we are being targeted for further and even more destructive attacks by our enemies, who want to cripple America’s position as the world’s leading economy. If you want to protect yourself and protect our country, then you need to read Secret Weapon to understand how we have entered a new age of warfare—an age our enemies want to make the Dark Ages of the United States.

Notice to our customers about Secret Weapon