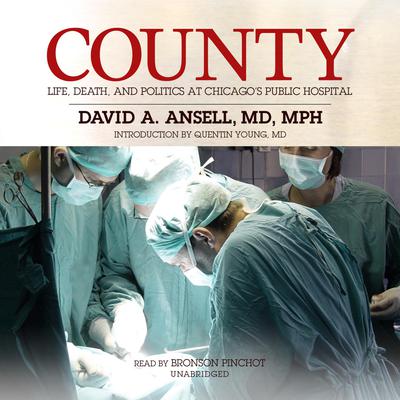 The amazing tale of “County” is the story of one of America’s oldest and most unusual urban hospitals. From its inception as a “poor house” dispensing free medical care to indigents, Chicago’s Cook County Hospital has been both a renowned teaching hospital and the health-care provider of last resort for the city’s uninsured. County covers more than thirty years of its history, from the late 1970s, when the author began his internship, to the “final rounds,” when the enormous, iconic Victorian hospital building was replaced and hundreds of former trainees gathered to bid it an emotional farewell.

Ansell writes of the hundreds of doctors who went through the rigorous training process with him, sharing his vision of saving the world and of resurrecting a hospital on the verge of closing. County is about people, from Ansell’s mentors, including the legendary social justice activist Quentin Young, to the multitude of patients he and County’s medical staff labored to diagnose and heal. It is a story about politics, from contentious union strikes to battles against “patient dumping,” and about public health, depicting the AIDS crisis and the opening of County’s HIV/AIDS clinic, the first in the city.

Finally, it is about a young man’s medical education in urban America, a coming-of-age story set against a backdrop of race, segregation, and poverty.

Notice to our customers about County