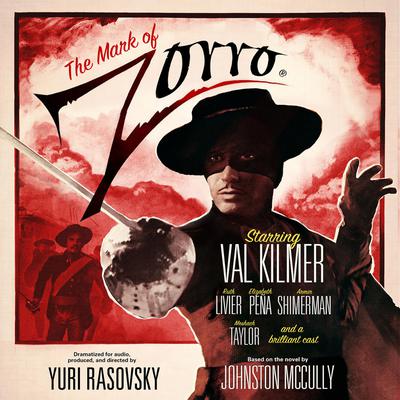 The Mark of Zorro

Set in Los Angeles during the era of early nineteenth century Colonial Spanish California, the story introduces us to wealthy, young aristocrat Don Diego de la Vega, son of the richest ranchero in the country. Don Diego is an idler who has never concerned himself with more than the cut of his clothes. Unlike other full-blooded youths of his age, he presents himself as a fop, lacking in vigor, vitality, and strength. But Vega’s timorous reputation is merely a mask to conceal his alter ego—El Zorro. As Zorro, dressed in black and wearing a mask, he is transformed into a cunning swordsman who fearlessly pulls off dashing and daring escapades in his quest to avenge the helpless, aid the poor and oppressed, and punish cruel officials. Deemed an outlaw by California’s corrupt governor, he is ever-hunted by the Commandante of La Reina de Los Angeles, Capitan Ramón, and his henchman, Sergeant Pedro Gonzalez.

Forced to find a wife or lose his inheritance, Diego sets off to romance the fiery, outspoken Lolita Pulido, the most beautiful señorita in Los Angeles. Unimpressed with Diego’s passionless efforts to win her affections, Lolita finds herself attracted to the dashing and courageous Zorro. With the Pulido family having been impoverished by the corrupt governor, her father would see her married to the rich Don Diego. At the same time, the nobly born, but morally dissolute, Captain Ramón has also taken an interest in the fair señorita, making matters worse. As tensions heighten between Ramon and the Pulido family and pursuit of the masked avenger intensifies, Zorro leaves his mark on those who would perpetrate injustice.

The Mark of Zorro, masterfully adapted into a full-cast audio drama by the award-winning Hollywood Theater of the Ear especially for Blackstone Audio, is an exciting, action packed, swashbuckling adventure that will have listeners on the edge of their seats.

Notice to our customers about The Mark of Zorro