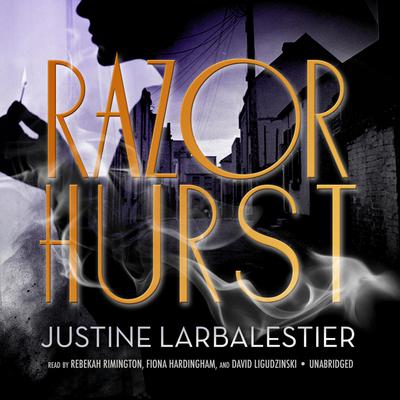 In the vein of The Diviners and The Crimson Petal and the White, Razorhurst reimagines the notorious history of mob-controlled Sydney-with a paranormal twist.Sydney's deadly Razorhurst neighborhood, 1932. Gloriana Nelson and Mr. Davidson, two ruthless mob bosses, have reached a fragile peace-one maintained by "razor men." Kelpie, orphaned and living on the street, is blessed and cursed with the ability to see Razorhurst's many ghosts, and she sees the cracks already forming in their truce. Then Kelpie meets Dymphna Campbell.Dymphna is a legendary beauty and prized moll of Gloriana Nelson. She's earned the nickname "Angel of Death" for the trail of beaus who have died trying to protect her from Mr. Davidson's assassins. Unbeknownst to Kelpie, Dymphna can see ghosts, too, and as Gloriana's hold crumbles one burly henchman at a time, the girls will need one another more than ever.As loyalties shift and betrayal threatens at every turn, Dymphna is determined to not only survive but rise to the top with Kelpie at her side.

Notice to our customers about Razorhurst