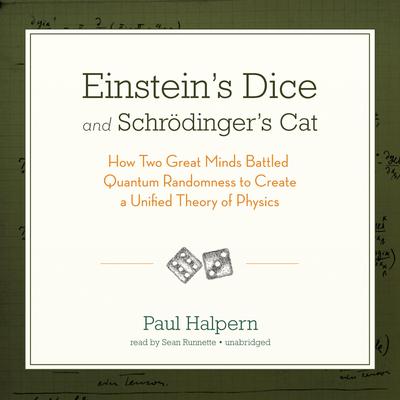 Albert Einstein and Erwin Schrodinger were friends and comrades-in-arms against what they considered the most preposterous aspects of quantum physics: its indeterminacy. Einstein famously quipped that God does not play dice with the universe, and Schrodinger is equally well known for his thought experiment about the cat in the box who ends up "spread out" in a probabilistic state, neither wholly alive nor wholly dead. Both of these famous images arose from these two men's dissatisfaction with quantum weirdness and with their assertion that underneath it all, there must be some essentially deterministic world. Even though it was Einstein's own theories that made quantum mechanics possible, both he and Schrodinger could not bear the idea that the universe was, at its most fundamental level, random.As the Second World War raged, both men struggled to produce a theory that would describe in full the universe's ultimate design, first as collaborators, then as competitors. They both ultimately failed in their search for a Grand Unified Theory-not only because quantum mechanics is true but because Einstein and Schrodinger were also missing a key component: of the four forces we recognize today (gravity, electromagnetism, the weak force, and the strong force), only gravity and electromagnetism were known at the time.Despite their failures, much of modern physics remains focused on the search for a Grand Unified Theory. As Halpern explains, the recent discovery of the Higgs boson makes the Standard Model-the closest thing we have to a unified theory-nearly complete. And while Einstein and Schrodinger tried and failed to explain everything in the cosmos through pure geometry, the development of string theory has, in its own quantum way, brought this idea back into vogue. As in so many things, even when he was wrong, Einstein couldn't help but be right.

Notice to our customers about Einstein's Dice and Schrodinger's Cat