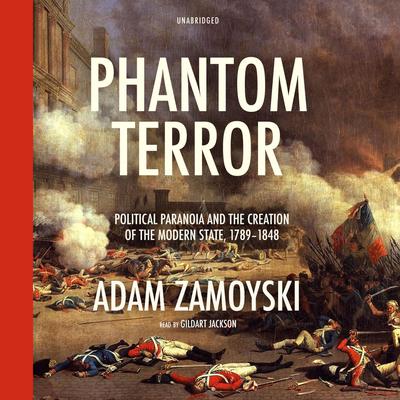 Political Paranoia and the Creation of the Modern State, 1789–1848

For the ruling and propertied classes of the lateeighteenth century, the years following the French Revolution werecharacterized by intense anxiety. Monarchs and their courtiers lived inconstant fear of rebellion, convinced that their power—and their heads—were atrisk. Driven by paranoia, they chose to fight back against every threat andinsurgency, whether real or merely perceived, repressing their populacesthrough surveillance networks and violent, secretive police action. Europe, andthe world, had entered a new era.

In PhantomTerror, award-winning historian Adam Zamoyski argues that the stringentmeasures designed to prevent unrest had disastrous and far-reachingconsequences, inciting the very rebellions they had hoped to quash. The newlyestablished culture of state control halted economic development in Austria andbirthed a rebellious youth culture in Russia that would require even harshermethods to suppress. By the end of the era, the first stirrings of terroristmovements had become evident across the continent, making the previously unfoundedfears of European monarchs a reality.

PhantomTerror explores this troubled, fascinating period, whenpoliticians and cultural leaders from Edmund Burke to Mary Shelley were forcedto choose sides and either support or resist the counterrevolutionary spiritembodied in the newly omnipotent central states. The turbulent politicalsituation that coalesced during this era would lead directly to the revolutionsof 1848 and to the collapse of order in World War I. We still live with thelegacy of this era of paranoia, which prefigured not only the moderntotalitarian state but also the now preeminent contest between society’s havesand have-nots.

These tempestuous years of suspicion and suppressionwere the crux upon which the rest of European history would turn. In thismagisterial history, Zamoyski chronicles the moment when desperate monarchstook the world down the path of revolution, terror, and world war.

Notice to our customers about Phantom Terror