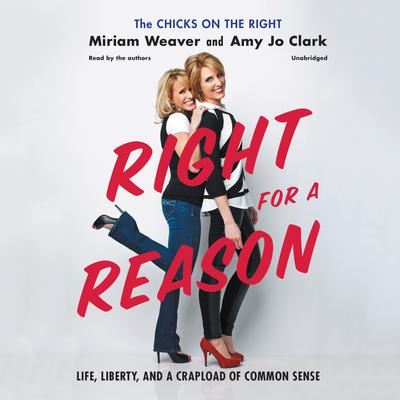 Right for a Reason

Life, Liberty, and a Crapload of Common Sense

“It’s time for a real, snarktastic, humor-filledlook at what makes conservatism right. We conservatives have truth andrationality and logic on our side. We just need to remind ourselves why we areright, and we need that reminder delivered in a way that’s not a lecture, not ahistory lesson, and not a complicated political diatribe.”

If you think all conservatives are old white dudes,think again.

It’s right to revere the Constitution. It’s right tovalue personal responsibility, economic liberty, and free enterprise. It’sright to think that political correctness is crap and to call outthe mainstream media for bias. And it’s right to laugh at the so-called War onWomen and to stand up for the unborn.

As they do every day on their blog and radio show,Miriam Weaver and Amy Jo Clark offer a definitive response to critics on the Rightand the Left and a cheerfully snarky pep talk for like-minded conservatives. On one hand, they are tired of the media’s portrayal of conservatives asrepressed sticks-in-the-mud; on the other hand, they are sick of GOP leaderswho play right into that stereotype.

With humor and insight, Mock and Daisy, as theChicks are known on their blog, explain why

capitalism is a good thing—success and the moneythat comes with it are nothing to be ashamed of;First Amendment protections extend to all Americans,not just those with whom we agree;Americans have a constitutional right to things thatgo pew-pew-pew;skin color is irrelevant;it makes sense to be pro-life and pro-Plan B.

The Chicks offer suggestions for a conservativemakeover that will realign the GOP with the regular folk, who are frustratedwith uptight and clueless politicians. But they also show why conservatismmakes sense for everyone—especially those who love their country, theirfamilies, God, rock and roll, and a well-made cocktail (not necessarily in thatorder).

Notice to our customers about Right for a Reason