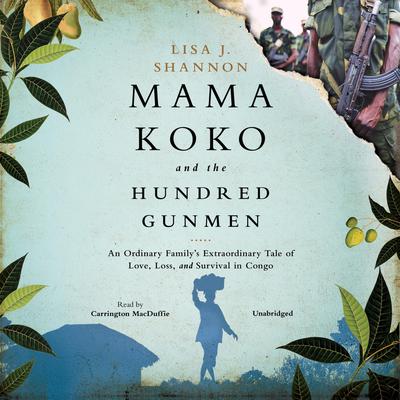 Mama Koko and the Hundred Gunmen

An Ordinary Family’s Extraordinary Tale of Love, Loss, and Survival in Congo

International human rights activist Lisa Shannonspent many afternoons at the kitchen table having tea with her friend FranciscaThelin, who often spoke of her childhood in Congo. Thelin would conjure vividimages of lush flower gardens, fish the size of small children, and of childrenrunning barefoot through her family’s coffee plantation, gorging themselves on fruit fromthe robust and plentiful mango trees. She urged Shannon to visit her family inDungu to get a taste of real Congo, peaceful Congo, a place sodifferent from the conflict-ravaged lands Shannon knew from her work as an activist.

In an unlikely journey, Shannon and Thelin decidedto travel from Portland, Oregon, to Dungu to witness firsthand the devastationunfolding at Kony’s hands. Masquerading as Francisca’s Americansister-in-law, Shannon tucked herself into Mama Koko’s raw cement living roomand listened to the stories of Mama Koko and her husband, Papa Alexander, aswell as those from dozens of other friends and neighbors—“Mama Koko’s War Tribunal”—wholined up outside the house and waited for hours, eager to offer theirtestimony.

In Mama Koko and the Hundred Gunmen, Shannonweaves together the family’s tragic stories of LRA encounters with tales fromthe family’s history: Mama Koko’s early life as a gap-toothed beautyplotting to escape her inevitable fate of wife and motherhood; Papa Alexander’sempire of wives he married because they cooked and cleaned and made goodcoffee; and Francisca’s childhood at the family “castle” and coffee plantation.These lively stories transport Shannon from the chaos of the violence around herand bring to life Francisca’s kitchen-table stories of the peaceful Congo.

But as the LRA camp out on the edge of town grew,tensions inside the house reached a fever pitch, and Shannon and Thelin’sfriendship was fiercely tested. Shannon was forced to confront her limitationsas an activist and reconcile her vision of what it means to effect meaningfulchange in the lives of others.

Mama Koko and the Hundred Gunmenis at once an illuminating piece of storytelling and an exploration of what itmeans to truly make a difference. It is an exquisite testimony to the beauty ofhuman connection and the strength of the human spirit in times of unimaginabletragedy.

Notice to our customers about Mama Koko and the Hundred Gunmen