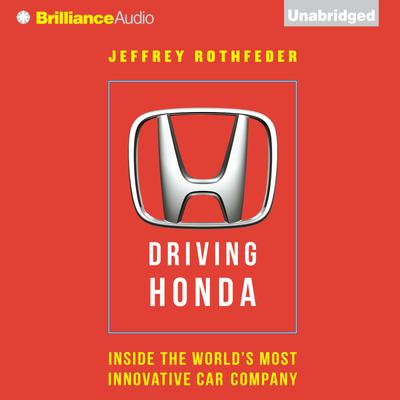 Inside the World’s Most Innovative Car Company

For decades there have been two iconic Japanese auto companies. One has been endlessly studied and written about. The other has been generally underappreciated and misunderstood. Until now.

Since its birth as a motorcycle company in 1949, Honda has steadily grown into the world’s fifth largest automaker and top engine manufacturer, as well as one of the most beloved, most profitable, and most consistently innovative multinational corporations. What drives the company that keeps creating and improving award-winning and bestselling models like the Civic, Accord, Odyssey, CR-V, and Pilot?

According to Jeffrey Rothfeder, what truly distinguishes Honda from its competitors, especially archrival Toyota, is a deep commitment to a set of unorthodox management tenets. The Honda Way, as insiders call it, is notable for decentralization over corporate control, simplicity over complexity, experimentation over Six Sigma-driven efficiency, and unyielding cynicism toward the status quo and whatever is assumed to be the truth. Honda believes in freely borrowing from the past as a bridge to “innovative discontinuity” in the present. And those are just a few of the ideas that the company’s colorful founder, Soichiro Honda, embedded in the DNA of his start-up sixty-five years ago.

As the first journalist allowed behind Honda’s infamously private doors, Rothfeder interviewed dozens of executives, engineers, and frontline employees about its management practices and global strategy. He shows how the company has developed and maintained its unmatched culture of innovation, resilience, and flexibility—and how it exported that culture to other countries that are strikingly different from Japan, establishing locally controlled operations in each region where it lays down roots.

For instance, Rothfeder reports on life at a Honda factory in the tiny town of Lincoln, Alabama, and what happened when American workers were trained to follow the Honda Way, as a self-sufficient outpost of the global company. Could they master Honda’s three core principles:

Real Place, Real Part, Real Knowledge: Honda teaches people to argue using facts, not assumptions. One must go to the factory floor, the showroom, the parking lot, the driver’s seat, or the truck bed—whatever it takes—to get the facts and make a decision that can be supported with data.

Respect Individualism: Honda often hires people with unusual backgrounds and independent streaks. It promotes those who question the status quo and who would probably struggle in organizations that focus on rigid rules and systems.

Rothfeder shows how the Alabama plant became a new model for manufacturing in America. It can turn out several different types of cars on any given day and up to 300,000 vehicles and engines a year. Its flexible model enables unparalleled responsiveness to market changes and recovery from mistakes.

As Soichiro Honda himself liked to say, “Success can be achieved only through repeated failure and introspection. In fact, success represents one percent of your work, which results only from the ninety-nine percent that is called failure.”