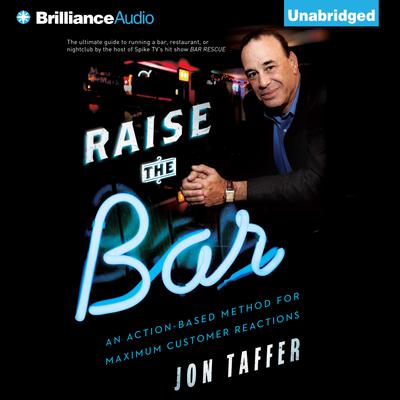 If there’s anyone who can prevent a bar or restaurant from going belly-up, it’s Jon Taffer. Widely considered the greatest authority in the food and beverage, hotel, and hospitality industries, he runs the biggest trade show in the business and has turned around nearly 1,000 bars and at least that many restaurants.

As host and executive producer of Spike TV’s Bar Rescue, a documentary-style series, Taffer gives struggling bars one last chance to succeed with a mixture of business acumen and tough love. Now he’s offering his no-nonsense strategy for eliciting just the right emotional reactions in customers to everyone.

Raise the Bar distills the secrets to running a successful enterprise with Reaction Management, a strategy and philosophy Taffer developed and uses in his business and on Bar Rescue. It works whether you’re running a storefront operation or a web-based company, whether you’re manufacturing widgets or providing a service.

Taffer’s overarching philosophy is this: All business is about creating the right reactions in your customers. Even better: You can control those reactions to a very large degree. Raise the Bar is the definitive manual on transforming a bar or restaurant with actionable, proven strategies for immediate impact.